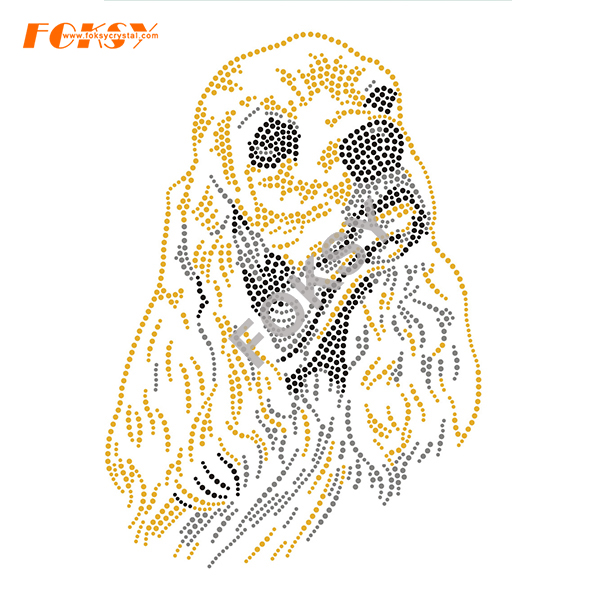 Mr.Smith and Mrs. Smith are a very old couples who were very loving. The couples spent most of their lives and love each other. But unfortunately Mr.Smith died of illness.Since then Mrs. Smith feel very lonely and sad. Then Mrs. Smith’s son was afraid of his mother’s loneliness and sadness, and then he bought a cocker spaniel, also called as a hunting dog.Let me briefly introduce cocker spaniel:
Cocker Spaniel has big and dark eyes with that sweet expression. Those long, lush ears that practically demand to be touched—no wonder the Cocker spent years as America’s most popular breed. Cockers are eager playmates for kids and are easily trained as companions and athletes. Also, dogs are also the best companion for the elderly. These energetic sporting dogs love playtime and brisk walks.

Since the cute dog was with his mother, his mother become happier. Then the filial son decided to iron on the dog’s picture on clothing in order to make the dog better accompany his mother The dog is made of the rhinestone which can heat on the clothing. The son decided to give this on his mother’s 80th birthday. The 80th birthday is coming, when the son took the clothes to his mother. His mother was very happy and said that even if the dog left me one day, I would feel that it was always with me and I would never feel lonely again. Since then, the son decided to open the company to do rhinestone design.He wants to bring happiness and companionship to more people.He hopes that the parents of the world will be happy forever.As soon as the product was on sale, it was liked by the masses.The rhinestone transfer can be given as a gift to family,friends,and so on.What a magical clothes, because it is made up of bling rhinestone. We have a strong design team to meet your request. What are you waiting for? Welcome to consult!

Any question, pls feel free to email me: foksy2@myrhinestone.cn

How to make your car shining

Wearing the same clothes to work every day for 3years:NO NEED TO BOTHER WHAT TO WEAR